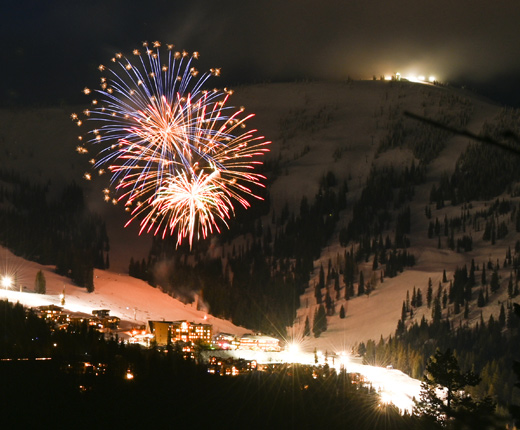 Northern Lights
Fireworks Spectacular
Join us over the MLK weekend for a Saturday night fireworks show!

The Schweitzer Mountain Community Association has got a Northern Lights show for ya, North Idaho style! We’re starting it off at 6:00pm with a torchlight parade down Jam Session, followed by a fireworks show in the village, then music and partying up in Taps afterwards! That’s right, North Idaho style is all the good stuff in life!

Want to be part of the show?
Well here’s how you can… The torchlight parade has space for 70 people and we’re going to fill it up. We start by inviting current Schweitzer employees to be part of it but whatever spots don’t get filled we’re offering to our guests. If you’re an intermediate (or better) skier or snowboarder, we want you to be part of the parade!

To join in the parade, you gotta follow a few simple rules though:

Must be 18 years old or older, and sign a release form

Must have a valid lift ticket or season pass

Visibly intoxicated people will not be allowed to participate.

If you are interested in joining in the fun and you are a Schweitzer employee you need to meet at the Schweitzer tent at the clock tower at 4:30pm on January 15th , with your employee pass, to sign the liability release form and pick up your torches. If you are not an employee you can pick up torches at the tent at 5pm on a first-come first-served basis until we run out. If you are 21 or over you will receive a free drink coupon redeemable in Taps Lounge after the parade. If you are under 21 you will get a soda coupon redeemable in the Lakeview Café or Sam’s Alley after the parade. Bring your ID and ski/snowboard gear with you, as you will load the chair immediately after the 5:30 meeting at the Clock Tower. The torches throw a lot of sparks that can burn holes in equipment so bring old gear and clothing! Don’t forget eye protection too. And most of all… HAVE FUN!