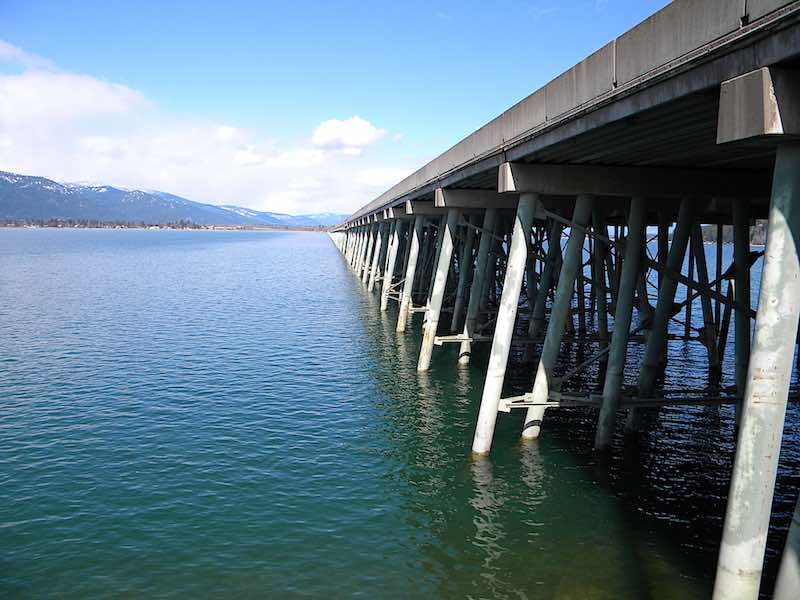 Driving north on highway 95 you will experience the Long Bridge into Sandpoint. I call it “the lake effect”. As you drive over the bridge into town there is a calm that is felt driving over the lake and slowing down as you come into the town. You begin to realize where the majestic and the amazement of this little town come from. Unlike other lakes towns you enter by driving along mountain sides and viewing the lake. Here in Sandpoint your welcomed by driving over it and it’s a real treat!

The Long BridgesSometime around 1900, Tom Craig’s 2 ½ year old son accidentally chopped his toe off. The family lived south of the Pend Oreille River and the only ways for the panicked father to get to the doctor in Sandpoint was by ferry, rowboat or the train trestle. Tom started running with his son across the trestle but had to jump to the side on a water barrel platform when a train approached. The train slowed, and Tom jumped on and rode into Sandpoint, where his son received treatment. This event highlighted the need to build a bridge to link communities on both sides of the river. Encouraged by farmer on the south side of the river, the Kootenai County commissioners began to plan for new bridge.On December 1909 contractors Donovon & Pearson drove the last nail into the 10,360 foot wooden bridge built. Some claim that it was the longest wooden bridge in the world at that time. The Wagon Bridge, as it was called, had a drawbridge to allow steamboats to pass through and used one million board feet of local timber. The sturdy bridge was well used for 23 years but by 1930 the wood decking started falling and cars had to dodge the holes while crossing the bridge.A second bridge built just downstream of the first was also constructed of wood. By this time the steamboat trade on Lake Pend Oreille had dwindled so there was no need for a drawbridge. Construction began in 1934, at the height of the Great Depression, and the project created employment for members of about 750 families in the area that needed assistance. Men were hired to log the timber, haul it to the mills, cut the lumber and build the bridge. Idaho governor C. Ben Ross visited Sandpoint in March 1934 for the dedication ceremony.Idaho winters are hard on a wooden bridge, and by 1956 a replacement was needed. A new steel and concrete structure was constructed to the east of the second bridge and had a northern entrance in Sandpoint near the NPRR tracks and away from First Avenue. This change was unsettling to residents until they realized the highway would still pass through downtown Sandpoint. The cost, almost $12 million dollars,, was quite an increase from the $20,000 cost of the first bridge.The fourth bridge–so far–was built in 1981. The third bridge was left as a walking and biking route. The Idaho Transportation Department completed a by-pass removing Highway 95 from downtown Sandpoint. Today Long Bridge fulfills its original function as the primary access point into Sandpoint from the south. It connects the rural communities and farms to the city and gives everyone breathtaking views of the lake, river and mountains that North Idaho is famous for.this article written by Mary Garrison, “The Long Bridge,” Spokane Historical, accessed September 18, 2020,